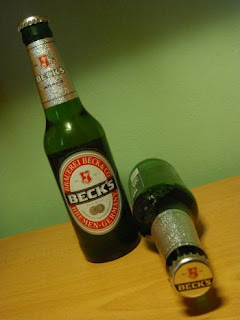 Beck's beer has been around for sometime now. The elders in my hometown only refer this beer by its key logo which represent this beer. Hence, Beck's beer is sometimes called the "Key" brand beer. 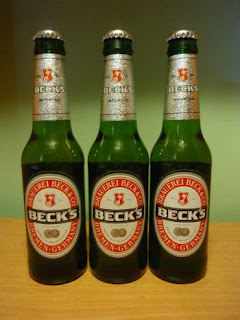 Beck's beer can be obtained rather cheaply in my place. One can get it for 3 bottles (330ml) for RM10 only from certain coffee shops such as Happy Hour Cafe in Rejang Park. 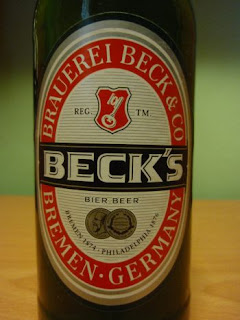 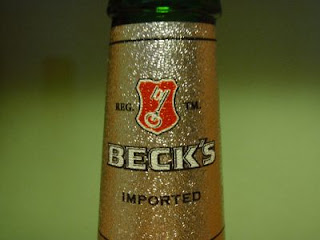 Beck's beer originated from Bremen, Germany and owned by a local families before been sold to Interbrew in 2002. 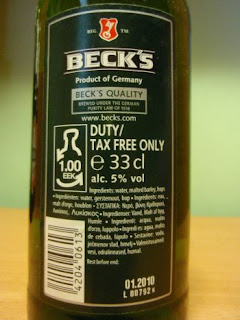 Its alcohol content appears to be normal at 5%. The beer is made of water, malted barley and hops. It has a shelf life of 1 year after it was brewed. 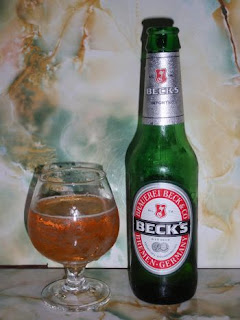 Beck's beer does not form much head when poured into a glass. It also had a weird taste if not served chilled enough. From what I found from the old timers here, Beck's used to be a popular beer around here in the 1970s to early 1980s. Somehow, the beer disappear from the market after that. According to them, the beer tasted so good back then, one need not to serve it chilled.

The beer is a bit bitter and lack the smoothness I seek. The bitter taste will linger inside the mouth for certain intervals after finishing the drink. 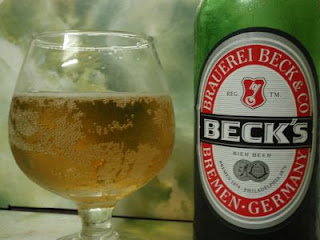 It is quite obvious the quality of the beer had dropped tremendously since the brewery has changed ownership. This is not my favourite beer (due to the presence of weird taste if not chilled enough). I just wish it could be brewed to the same standard and quality as it used to be.
Posted by Borneo Falcon at 1:40 PM

First encounter with this brand, sorry I seldom drink (not used to the bitter taste)and not aware of latest branding in the market. Often see other older brands like C, T, G in coffee shops.

I seldom drink the beer unless forced by my friends.

I remember this beer, it used to be very popular during my dad's time. We called it Beck's kunci beer when we were little. And it bears my name, too! You can find this beer at the German restaurant at the Curve at Mutiara Damansara.

i havent tried that yet.but i wonder if you already tried san miguel beer. our local beer.

Talking about beer, Tsingtao is always my favorite!

I have not try San Miguel beer yet. Fancy to try one but it is not widely available here