RCL brand shuttlecock is not available here in Sarawak and Sabah and this will be my first review on RCL branded shuttlecock. Special thanks for Mr. Ang from Tatt Seng Sporting Goods Sdn Bhd in Penang for supplying a few RCL shuttlecocks for me and my group to test it out. 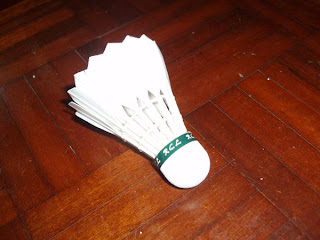 RCL Professional cost RM45 per tube in West Malaysia and I believe it is a decent price if it performed well. 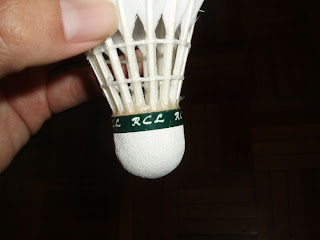 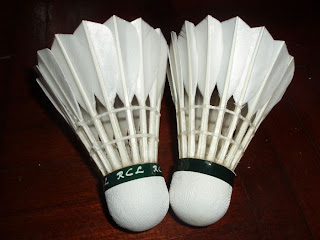 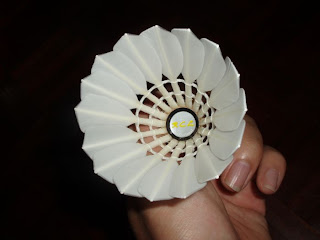 RCL Professional sticker at the base of the cock. 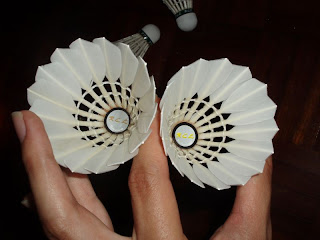 RCL Professional and RCL Titanium (which I will review soon) shuttlecock almost had the same sticker design and one might have difficulty to differentiate them. If observed closely the "RCL" word for the Professional is in yellow while the Titanium is in light brown. 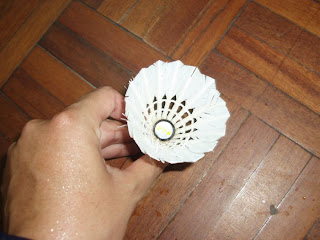 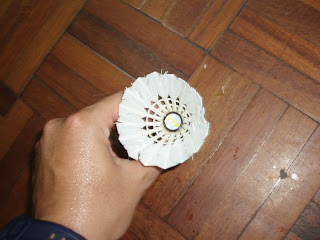 It's time to put the shuttle to test. This is how the RCL Professional looks like after a pulsating and rigorous double game (15 points system). Notice none of the feather had detached. However, the circular arrangement of the feather stems had distorted a bit. In the end, the shuttle lasted one and a half game.

RCL Professional flight performance is good. It won't go out easily at the base line with a light tap from the net, unlike the other cheaper shuttlecock I reviewed before. I was able to direct my shot accurately while using RCL Professional shuttlecock. Another point to note is although the circular arrangement of the feather stems had been compromised, the shuttlecock still performed normally with minimum "spinning" effect.

I was satisfy and surprised with RCL Professional performance and endurance. With the reasonable price tag, I am sure going to purchase it if it is available here
Posted by Borneo Falcon at 12:02 AM


looks to me that when it comes to shuttle cocks, you are the expert man~~

confessions of a medical student said...

how i missed playing badminton...
but i just play for leisure.. not very picky with shuttlecocks.. hehe..