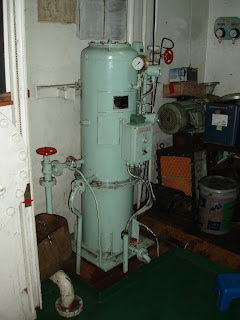 Every ship needed to fit oily water separator to conform to the MARPOL (Marine Pollution) Convention set by the IMO. Its main function is to process the oily or dirty water inside the engine room (usually bilge) and discharge the process water to the sea in order to protect the environment. The discharge water must be less than 15ppm (parts per million) according to the regulation. There are many manufacturers available with the Japanese and the European manufacturers have the better quality. Korean also manufactured a handful model with decent quality. also manufacture actively lately but of poor quality.

A typical Japanese built oily water separator is as shown (TAIKO TYPE, UST Type Series). This type of oily water separator is divided into 1st, 2nd and 3rd chamber. Coalescer is installed in both the 2nd and 3rd chambers. For this equipment, a gravity separation method has been adopted, by which oil is separated from water by the difference of the specific gravity between the two.

Oil/water mixed liquid, accumulated in the bilge tanks is led into the inlet of the oil separator by a bilge supply pump. Then, it is roughly separated in the 1st separation chamber. At this time, sludge can be also separated and is then accumulated at the lower inlet. It is necessary to open the sludge valve sometimes in order to transfer the sludge into the sludge tank.

The oil and oily matters floated and separated in the 1st and 2nd separation chambers are accumulated in the oil reservoirs in those chambers. The level of accumulated oil is detected by an electrostatic capacity type probe. Then, a solenoid valve is opened by the command of this detector. Accordingly, the oil is automatically drained in due course. 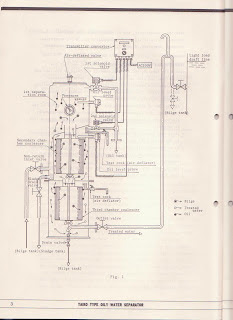 Schematic Drawing of the Operation of Oily Water Separator

The European manufacturers (and the bigger tonnage ship) will usually incorporate a 15ppm alarm where should the discharge is more than 15ppm, the 3 ways valve will shut down to prevent the discharge. The alarm will also be audible to alert the engineers onboard. 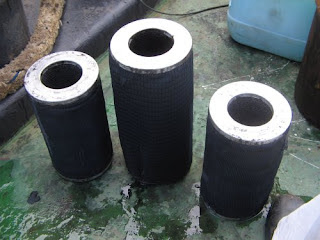 For maintenance, the coalescer should be clean and if damaged, it should be replace with new one. The inside of the separator must be cleaned to wipe off the stains or oily matters. 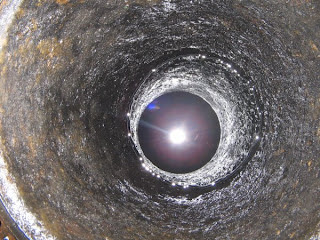 Stains and oily matters inside the oily water separator

The effectiveness and the operation of the oily water separator is surveyed annually by the Classification Society in order to maintain the ship’s International Oil Pollution Prevention (IOPP) Certificate.

Posted by Borneo Falcon at 8:00 AM

Hi. Do you happen to have this UST type OWS manual? I have one but it is in Japanese