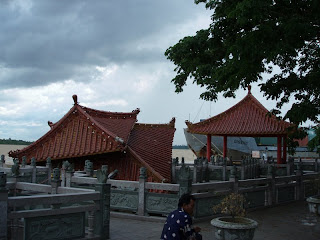 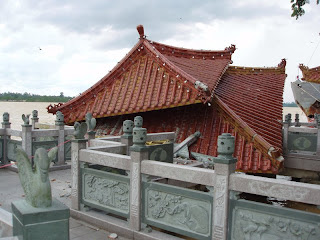 There was a freak accident on the 29th May 2008 around afternoon around 1245. I received the news from a colleague of mine and I rushed to the scene to have a look. This report/article should reach the audience before the local newspaper reach the readers this morning. 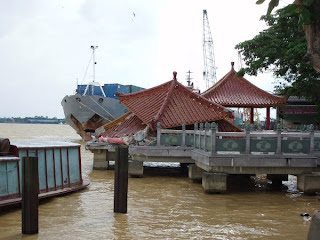 A container ship rammed into the Tua Pek Kong Pavilion while trying to alongside the port. Observe how close the port are and the pavilion (see my previous post photo, taken from inside the port area). It is just basically next to each other. There are some common possibilities that lead to this incident such as strong river current, lapse of concentration or wrong judgement by the ship's Master, main engine failure and steering gear failure during the mooring time. 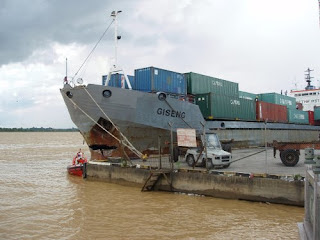 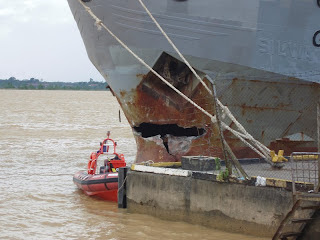 The ship is a regular to Sibu, MV Giseng, owned by Perkapalan Dai Zhun. The collision with the pavilion had created a big hole at the forward stem area, above the bow of the ship. The hole expose the forepeak tank. The ship shall not sail far with this condition and require immediate repair before assuming operation again. The orange inflatable boat should be from the Marine Department and they are investigating the accident 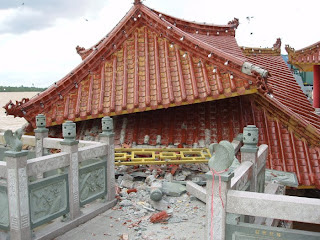 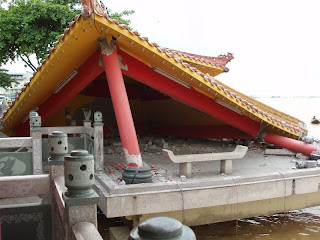 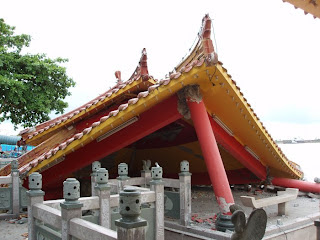 Here are a few images taken at different angles to show the damage. I believe the damage could well reach millions. The company better have a P & I Club to cover this losses. The 4 support pillar collapse and the shelter crash to the ground, damaging the railing, the expensive roofs, swan statues, lights and probably marble chair. The quayside should be damage slightly as well.

From the damage the ship sustained as well as the pavilion, I suspect the ship PORT side bow graced the pavilion concrete quayside edge and taking down at least 2 support pillars in the process. The other 2 support pillars gave way as they lost support and the shelter collapse down. The ship could have over shot and fail to return to a safe position while mooring. 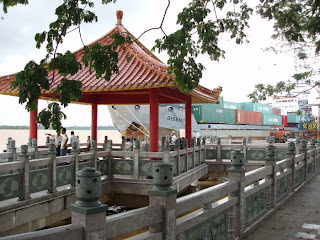 I do plan to write about the Tua Pek Kong and its pavilion in my future post. Guess the sight might never be the same again. I always suspect it is quite dangerous to built such a structure near a port area as there should be sufficient clearance so ships could moor safely to the quayside. This is another failure by the politician here to make proper assessment before commencing a mega project.
Posted by Borneo Falcon at 12:01 AM