How to determine a ship's age?

With the introduction of ISPS Code (International Ship & Port Facility Security) in 2004, a few requirements had been imposed for ship owners in particular to comply with the code. One of the requirements is to permanently welded the ship IMO number to either the superstructure, aft of the ship or side shell. The IMO number is like a birth certificate number for a ship. The reason for it? It is to make life difficult for the hijackers to sell the ship after they manage to get rid of the crew onboard by dumping them to the sea or whatever means. The hijackers will then have to get rid of the IMO number or otherwise the authority will able to spot it. In order to get rid of the number, the hijackers will need to cut of the steel plate containing the number to achieve it. The same goes to why some car owners sand blast the wind screen on their car with the car plate number.

Anyway, the introduction of this code has given us with the best tool to estimate of the ship's age by just looking at the IMO number without going too deep to get those information Very few ships in the world will weld the IMO number on the superstructure for some reasons. Anyway, pay attention to the 2 numbers at the front, in this case 86. This means the keel for this ship was laid on 1986, in other words, the construction of this ship started on 1986. Usually the ship will be completed in 1 year, giving 1987 as the year of completion. Hence, this ship age is roughly 21 by now. 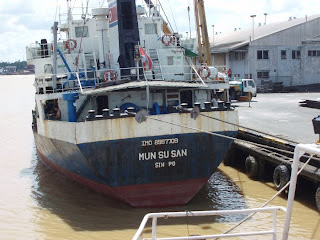 Most ships would prefer the IMO number to be welded at the aft as shown above. I guess it is more neat and shows all the essential information at a place, which are the ship's name and port of registry. In this case, the 2 front numbers are 89, meaning construction start at 1989 and assuming the ship completed in 1 year, 1990. Hence, the ship should be around 18 years old by now.

By marine standard, cargo ship or tanker above 15 years old is considered old.
Posted by Borneo Falcon at 12:03 AM