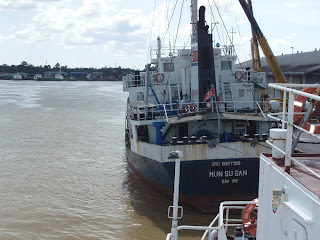 I have seen many ships registered under some odd countries calling at Sibu port such as Belize, Vanuatu, Panama, Liberia, Mongolia and etc but never from a communist country such as North Korea. Recently a North Korea registered ship call at Sibu port carrying rice and was unloading the cargo at the port. Obviously there is a shortage of rice here until we had to resort to get rice from this ship. The ship is probably chartered by someone else to carry rice here.

From the ship design, it was made from Japan. Physically, it is not well maintained and manned by the North Korean. It is classed with a odd classification society I never come across. The load line is carved with KC which I will assume as Korean Class, probably a local classification society. 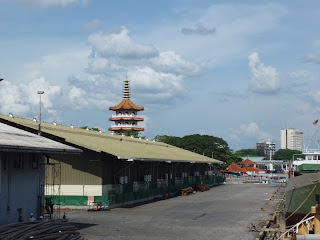 This is another view taken from the port area. One can see the Pagoda (a.k.a Tua Pek Kong locally) and the Trade and Exhibition Centre (the one that looks like a storage place). The Trade and Exhibition Centre used to be one of the cargo storage building for the port until few years ago the local government used as the exhibition centre. I think this is a bad move. The structure is nothing impressive and the internal is not well refurbished (again I would like to question on how the government spent the money). There is not enough car park when there is a major event there.
Posted by Borneo Falcon at 12:01 AM