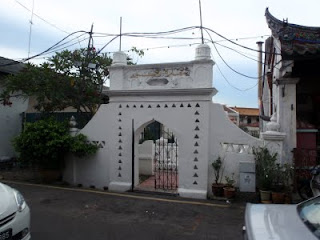 Hang Kasturi Mausoleum is located at Jonker Street. One might miss it on a very busy day when stalls are set in front of the pavement and obscuring the sight of the white arch which act as the main entrance to the tomb. 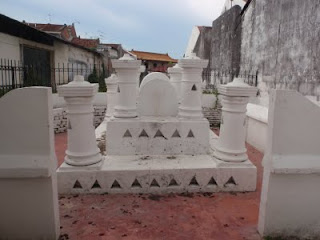 In the Malay Annals, Hang Kasturi was set to be the traitor for killing his brother Hang Tuah without proper investigation. Hang Tuah who was hidden by the Prime Minister in Ulu Melaka took revenge by killing Hang Kasturi in such a big battle for being a traitor to the Sultanate. However, based on another story known by many people, Hang Jebat was the real traitor who finally died in the arm of Hang Tuah. 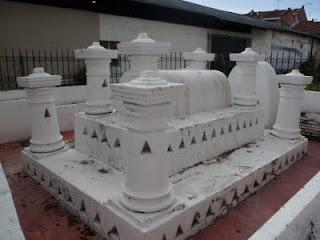 The structure of the tomb of Hang Kasturi was much influence by the art and architecture from India where there are openings to put candle lights around the tomb. This tomb is staggered unlike other tomb which is long and considered to be holy. The tomb has been gazetted as a historical site.
Posted by Borneo Falcon at 7:09 AM